A Look at the Cost of Living in Los Angeles

California stands out in the US as a highly desirable place to live. However, the cost of living is anything but desirable.

In 2019, Los Angeles was voted by the Economic Intelligence Unit to be the tenth most expensive city to live in. Five years before the city was tied with New York City for 39th. California’s growth is producing higher wages and new industries, but those opportunities come with a hefty price tag.

How much more expensive is it? 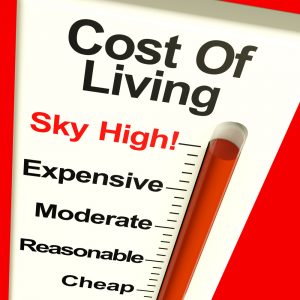 Basic expenses like housing, food, taxes, and healthcare consistently average much higher than the rest of the country. A salary of $50,000 or more is recommended to maintain a comfortable standard of living.

A one-bedroom apartment averages between $1,900 and $2,100 a month. The staggering rent for a two bedroom is 137% higher than the national average.

Almost every budget must factor in high transportation costs. LA is a car-centric city, which means gas prices soar and insurance can cost well over $100. Drivers are burning through gallons of gas much more quickly by sitting in hours of traffic a day. Hopefully, Mayor Garcetti's 28 by 2028 Initiative will open up more opportunities for Angelenos to implement public transit in their daily routines.

In general, Californians voted that their top financial stress is the cost of living overall.

Why is it so expensive?

Some attribute the cost of living to state and local policies that affect doing business, buying property, and maintaining the standard quality of life.

Others attribute basic economics: when demand is high, prices rise. So when expenses cost more, salaries go up, but unfortunately not enough to support the California lifestyle. This is causing rippling effects that could be disastrous in the future.

Why is this concerning?

After spending only a short time in California, it is easy to see how high the cost of living is. However, the deep effects are not as easy to see.

Californians are leaving in vast numbers

Californians are fleeing their home state at an alarming rate. In 2018, 38,000 more people left California than moved here. 28,190 people left San Francisco between April and June 2019.

U.S. Census Bureau reports that middle- and lower-classes are fleeing more rapidly due to the alarming housing crisis. Those with incomes under $100,000 are in the most trouble. According to the Blacktower Financial Management Group, California is the third worst state to retire in, which causes people to move to places like Arizona and Florida.

The current pandemic has sharpened the questions of affordability and lifestyle. Only time will tell how many people decide to move out of their large cities and either back to their smaller hometowns or to suburbs outside of the metropolitan area.

This does not bode well for business

As everyday life becomes more expensive, large and small corporations move elsewhere, taking their employees and most importantly their money with them. For example, California is losing far more jobs to China than any other state. Simply lowering the cost of living would be equivalent to a boost in GDP for California.

Prior to the current pandemic, the UCLA Anderson School’s annual forecast gave a little bit of reassurance for 2020. The housing market was improving, and the trade dispute for China was resolved for the most part. The unemployment rate was at its lowest since 1976. Even though they are hard to forecast, there was nothing in the pipeline that would suggest a recession in the first six months of 2020.

However, the future of the economy is simply unknown. For this reason, new taxes like Split Roll would be devastating to California. Click here to donate to and learn more about the Industry Defense Fund that supports our advocacy efforts to combat Prop. 15, California's dangerous Split Roll tax initiative.